I’ve just come back from a weekend workshop with Natalie Goldberg on Memoir writing. It was given at Kripalu,

a yoga center in Massachusetts where I like to go to resource every once in awhile.

The way Natalie got us writing was by providing us with a topic, such as I’m not thinking of…. Say what you want to say not what you should say. Go.

I also learned that I have an undernourished memory. Natalie would have a participant read a piece of writing and we were to listen, then recall what we had heard. No comment she insisted. It was neither good nor bad. Writers have to write a lot of junk before they get to something powerful. Instead she told us to observe mind. I loved all the writing I listened to. It was poetic, tender and very often amazing. Yet, I couldn’t recall a single word and found myself panicking in front of my blank mind.

I learned that Saul Bellow (recipient of the Nobel Prize for literature) even after writing two novels and being awarded a Guggenheim fellowship did not feel he belonged as a writer. It was only after he had given up on his struggle with his third novel and began to write The Adventures of Augie March that he found his writing voice and wrote the novel effortlessly and with great enjoyment.

I looked up Saul Bellow on google. He was born in Lachine, Quebec, only a few miles from where I live. And that in Lachine is the Saul Bellow Municipal Library. I often go to Lachine to walk along the seaway 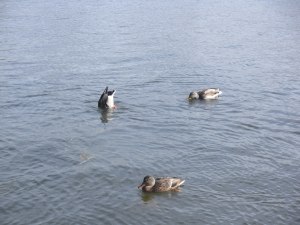 with its wild marshes, herons and rose aisled walkways. I’ll make it a point the next time to drop into the library. I’m sure they must have Philip Roth’s interview of Saul Bellow on his writing, which was published in the New Yorker.

I learned from Natalie that sometimes to get to what you want to say you have to start out with what’s right in front of you. For example, suppose I want to learn what it is I need to talk about. So I start by describing what is in front of me. Sunshine coming in through a pair of sheer curtains the color of kiwis. Or perhaps I can describe what’s not in front of me. The ivy branches that were cut away because of a job on electrical wiring. I loved having the ivy in front of my office window. It gave me a sense of privacy and it was much prettier than the clothes line or the piping against the brick wall that I now face.

I learned that good memoir writing is about the places that scare us and bring us to emotions we would rather not think about let alone write. But write we must. Without censuring.

At Natalie’s workshop I discovered the writer Paul Swieg and his steamy memoir Departures that I definitely want to read not only for the sexy scenes but also for his poetic language. And also I want to read The Ballad of the Sad café by Carson McCullers.

I learned that if you want to be a writer look over your shoulder and see that nobody gives a shit whether you write or not.

I learned not to make up something new. Just go deeper.

I learned that it’s a good thing to imitate good writers in order to get better. It was comforting, reassuring and encouraging for me to learn this for I often worry that I’m too easily influenced by other writers’ styles. Their style or voice seems to show up in my own writing. You should imitate them, Natalie said.

I learned that saying something is the color of whipped cream is more effective than saying it’s white and that good memoir writing is about losing control and saying what you want to say.

4 thoughts on “What I Learned From Natalie Goldberg. Go.”