It was my friend, Denise Dufour who told me that there was no Santa. It was Christmas day 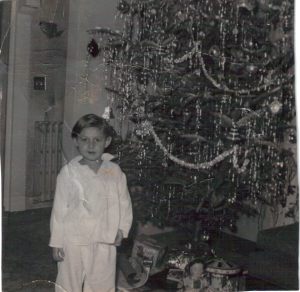 and we were in front of my house building a snow fort when she said, “Did you notice that Santa was Mr. Simoneau. I knew it was him,” she said, “because of his crossed eyes.”

Mr. Simoneau worked for my father at his restaurant and he had hired him to play Santa at my house and also at Denise’s house. Denise’s father was Roger, my father’s best friend.

I had been more excited about the miracle of Santa appearing at my house and the presents he brought than to notice his crossed eyes. And even if I had, I don’t think I would have made the connection. I was much too enchanted by the fantasy to notice that behind the Santa beard and the Santa suit there was a real man. A Mr. Simoneau. And so when Denise reveled to me this truth I was crushed and I at once lost all interest in fort building or being with Denise. In my child like mind I wondered if I could still be her friend.

I stomped home and flung my red rubber boots unto the kitchen floor not caring if I dirtied it. My father was sitting having a cup of coffee. It was rare that I saw him at home, especially in the middle of the afternoon. But this was Christmas day and his restaurant was closed.

“You lied to me,” I shouted. “There’s no Santa.” I told him about Mr. Simoneau’a eyes and began to cry.

My father slid his coffee cup aside, got up and went to the sink where he reached for a dishcloth and slowly began to wipe the slush my boots had left on the floor. Had I been older and more observant I would have interpreted that action of his as one of tenderness and love. My father was never slow. Unlike my mother, who for longer than she should have, rejected a walker and then when even the walker was not enough to support her she stubbornly refused to surrender to a wheelchair, my father perceived the walker in a more practical light. It was a means that allowed him to move at his normal full steam ahead pace.

I remember in the weeks before his death taking him to the bank and in the hallway of his apartment going towards the elevator I fell behind him and said, “Slow down. There’s no need to go so fast.”

“You’re right,” he said as I caught up to him. I have often wondered what went through his mind at that moment. As I drove his Honda out of the garage and into the summer traffic he sat next to me talking about his GIC’s. “You watch me at the bank how I’ll get a better interest rate,” he told me.

I realized then as I drove unto the ramp and into the highway that he still had lessons to teach me just as that Christmas afternoon as he crouched wiping the mess my boots had left on the floor. His plan to make a fantasy come true for me and my younger brother had backfired. I can’t imagine how he must have felt.

He took my snowsuit and hung it on the hooks next to the kitchen door. “You’re getting to be a big girl,” he said.

But I didn’t want to be a big girl. I didn’t want the truth. I wanted to believe in Santa and that my father was the best father in the world. And that he wouldn’t lie to me.

Years later, he would say the same thing to me when I would be looking at myself in the full length mirror in our hallway next to our den. My father was sitting in his lazy-boy chair watching television and I complained that my hips were getting big.

“That’s because you’re becoming a woman,” he said.

I recently asked my brother how he had felt that there was no Santa. He couldn’t remember how it had happened but it hadn’t affected him the way it had affected me. Even in his little scientific and practical mind he didn’t really care as long as there would still be presents for him.