It was in Saint Henri that one of Canada’s greatest authors, Gabrielle Roy, set her famous novel The Tin Flute, translated from the French Bonheur d’occasion. The novel depicts the grinding poverty of working-class families of Saint Henri in this post WWII industrialized section of Montreal and won several awards, including the Governor General’s Award, the Prix Femina in France and made into a movie in 1983. Truly a great novel.

I had read the novel in university and again a few years back and so one of the first things I asked Andre when I met him in front of the Lionel Groulx subway station was, “Are there any historical sites of Gabrielle Roy’s Saint Henri?”

As I followed him west we came across this plaque out of nowhere. I looked around to see if perhaps there might be a historic house, perhaps the house of Florentine, the unforgettable character of The Tin Flute or the snack bar where she worked and met the tragic love of her life, Jean Levesque. But there was nothing but this:

It started to rain and we both took out our umbrellas, his black, mine orange. “Do you mind continuing our walk?” I asked.

“Not at all,” he said. I was happy to hear that, although I knew that the rain would affect my photos. Nonetheless, we continued to walk and chat and I continued to take photos.

To get to the B&B we went through Saint Henri Square.  “I come here to write,” said Andre, “because it is so quiet.”  It reminded me of squares I’d seen in Savannah. The park had a wonderful fountain in its center surrounded by bright red park benches.

The B&B  was across the street from the square.

“It used to be one of the most prestigious B&Bs in Montreal,” Andre said as we scuttled through the Friday afternoon drizzle. I could see why.

“But it’s now been sold into condos.”

Saint Henri is considered one of the poorer sections of Montreal, ironically adjacent to Westmount, one of the richest.

Much of Saint Henri still remains poor today although among the dilapidated buildings are some charming homes such as this one and the outside staircases so typical of Montreal.

As we continued our walk,  I learned that Andre had two dogs,  that he’d been living in Saint Henri for over thirteen years and that he once worked for the Human Rights Commission. I suppose, I could have got all this information sitting across from him at a Starbuck’s but it wouldn’t  have been as interesting. Walking around his neighborhood  took away the interview feel of meeting over coffee; it was a lot more relaxing, a lot more natural.

I pointed out features of his neighborhood which, living there day-to-day, he had failed to notice. Like the lovely old lampposts and this wonderful Spanish style building which could easily have been in Old Havana.

I learned that Andre played tennis and badminton and  was interested in boxing.  “You must have heard of Louis Cyr? He asked me.

“They just made a movie about him.”

“Oh, yes, I heard about the movie.  It’s one of this year’s top rated Quebec movies,” I said.

We crossed the street to where Louis Cyr’s statue was.

“You know he’s still the strongest man in the world,” Andre said. 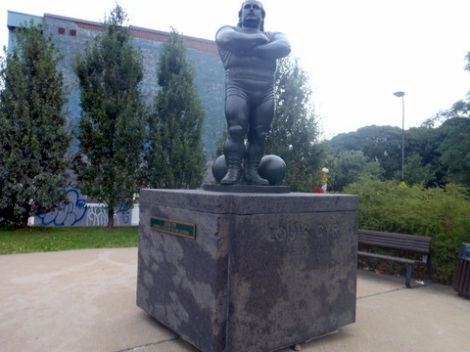 All the while, Andre and I talked about our writing. He had boxes and boxes of stories, some that had been published but his favorite was a collection of stories regarding the writing life. “I really like those stories,” he told me.

He’d gotten discouraged, not from this collection but from others. “You get to a point where you’re tired of being rejected,” he said.

I asked him about his writing stories and as he described them I knew that these were just the kind of stories that I love to read. I encouraged him to send out queries and we talked a bit about the changes in the publishing industry.

He had brought along an article on Isaac Asimov . “I know all the miseries, but somewhere among them is happiness. I can’t easily explain where it is or what it consists of, but it is there. I know the happiness and I experience it, and I will not stop writing while I live…”

The next day, Andre sent me a short e-mail telling me how much he had enjoyed meeting me and best of all that I had given him the spark to contact publishers again about his writing.

Sparks. You never know how or when they can happen.

8 thoughts on “Ten Great First Dates: Walk on the Other Side”