I am taking a writing workshop organized by the Quebec Federation of Writers. The workshop is given by Anosh Irani who is currently writer in residence at McGill University in Montreal. 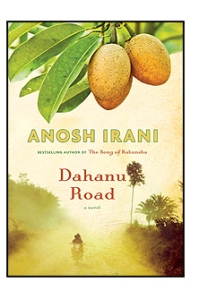 His novels have received wonderful reviews:

“Like Shakespeare’s Romeo and Juliet, Dahanu Road, by Anosh Irani, is a story of forbidden love. Irani writes evocatively in a tale that has humour and texture as well as pathos.”
– ELLE CANADA

Anosh Irani does for Iranis what Rohinton Mistry did for Parsis.  The Irani community comes alive for those who do not know it.”
– SUNDAY TIMES OF INDIA

At one of the classes, Anosh reads from an opening paragraph from a story in Denis Johnson’s Jesus’ Son, widely  considered as one of the best American books of the 20th Century

“I’d been staying at the Holiday Inn with my girlfriend, honestly the most beautiful woman I’d even known, for three days under a phony name, shooting heroin. We made love in the bed, ate steaks at the restaurant, shot up in the john, puked, cried, accused one another, begged of one another, forgave, promised, and carried one another to heaven.”

“What makes this great writing?” Anosh asks us.

“Surely not the vocabulary. It’s so simple. No complex sentence structure. What if the author had simply said: I’d been staying at the Holiday Inn with my girlfriend, honestly the most beautiful woman I’d ever know.  Nothing unusual about that, right?”

But then the author adds:

under a phony name,

I certainly was. As a criminologist, who worked with heroin addicts, this kind of story pulled me in.  But what about other readers who have never even seen a heroine addict?  What is it about this story that gives it sticking appeal?

Donald Antrim from the New Yorker provides an insight. “I was surprised by how dense it is, by how short it is, and really by how bold the story is.”

How bold the story is. Anosh keeps telling us to take risks. Unless we do that we’ll never know how good we are.

Antrim goes on to talk about how the story is alive because of its narrative speed, the shortness of the sentences.  And how you’re surprised all the time. But also his descriptions of the world.  It’s  a reality we can see and feel. As for the stories themselves, Johnson has a great love for his characters, and in spite of all their faults, you develop that same attachment to them.

Okay now we’ve got a few clues as to what makes a story great:  short sentences. Narrative speed. Surprise the reader, make the reader see and feel the world of your story and have endearing characters.

In other words, make your story move.

What else?  Here’s what Ken Wohlrob  has to say about Denis Johnson’s writing:

“The enthralling part of Johnson’s writing is that no matter how appalling we find the characters, we understand and sympathize with this motley crew of addicts, bad husbands, deadbeats, and alcoholics. Mostly because Johnson is able to show the reader how much those nine-time losers resemble us.”

So here’s another clue: make the reader identify with the character.

This year marks the 100th anniversary of Albert Camus’ birth.  His biographer Olivier Todd in a recent interview stated that Camus’ writing is great because its simplicity in language appeals to everyone regardless of education. But simplicity doesn’t exclude poetic beauty nor inspiration. Look at this passage from Camus’ The Fall:

“Look, the doves are gathering up there. They are crowding against one another, hardly stirring, and the light is waning. Don’t you think we should be silent to enjoy this rather sinister moment?”

There is a tremendous difference between a best seller and a great book. I am a fan of crime fiction and see that there is a wide margin between, for example, Julian Barnes’ The Sense of an Ending or Margaret Atwood’s Alias Grace and the detective novels popping up in series. This is the difference between depth and entertainment. In the former, what I consider great literature, I leave the book thinking about it for days maybe even years after. The writer’s work has penetrated into my cells, I am in some small (or maybe great) way changed. I have understood the world a bit better.  In the later I’ve forgotten it as soon as I’ve read the closing paragraph.

As a writer, I know that I will never conquer the literary heights of a Denis Johnson, a Julian Barnes or an Albert Camus. But these are models for me to help me push myself further. To help me identify my voice.

For a writer, that’s pretty good advice. As Anosh Irani said about his own writing: the process is the most fun.

Perhaps greatness ought to be categorized. A great book to take to the beach. A great book because of an interesting character. A great book to overcome your prejudices . A great book to frighten you, make you wonder and imagine. Great because it makes you cry and my God how long has it been since you’ve shed tears? Or great because you are laughing once more when you thought that laughter would never again come to you.

So,what do you think makes a book great?

You can hear the entire podcast with Donald Antrim here: http://www.newyorker.com/online/blogs/books/2013/08/fiction-podcast-donald-antrim-reads-denis-johnson.html.

One thought on “What Makes A Book Great”