Flour: Smooth flour, sliding more silently than water, can sift across a naked child without waking him.

Salt: The salt that bleaches the seagull’s belly and crackles in the penguin’s breast, and that in mother-of-pearl plays with colors that are not its own.

The Pineapple: A warrior fruit scared from the chest of an Amazon. And contained in this concise capsule, the whiff of a scent that can perfume a field. 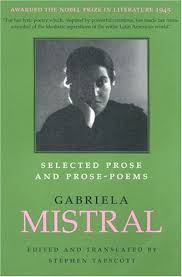 Writing tends to make me happy; it always soothes my spirit and bestows on me an innocent, gentle, childlike day. It is the feeling of having spent a few hours in my true homeland, in my habits, in my unfettered impulses, in full freedom.

Here are some interesting facts about Gabriela Mistral:

In 1956 she was diagnosed with terminal pancreatic cancer. A few weeks later, in the early hours of 10 January 1957, Mistral died in a hospital in Hempstead, Long Island. Her last word was “triunfo” (triumph). After a funeral ceremony at St. Patrick’s Cathedral in New York City, the body of this pacifist woman was flown by military plane to Santiago, where she received the funeral honors of a national hero. Following her last will, her remains were eventually put to rest in a simple tomb in Monte Grande, the village of her childhood.

What the soul is to the body, so is the artist to his people, she once stated, and these words were also inscribed on her tomb.