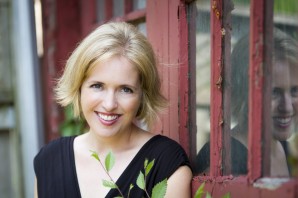 I wanted to feature Kate Hilton in this series because her self published novel was picked up by a traditional publishing house.

Kate is the author of two novels, THE HOLE IN THE MIDDLE and JUST LIKE FAMILY (2017).  She is also the author of the non-fiction blog THE PEN PAL PROJECT.  For fun, Kate organizes stuff.  At the moment, she is on the Board of the Writers’ Trust of Canada, and is Deputy Control Freak for Authors for Indies, a grassroots event celebrating independent bookstores in Canada.  Kate lives in Toronto with her two sons, where she is working on her third novel.

How I Got Published

Before you publish, as we all know, you have to write.  I wrote my book, The Hole in the Middle, while I was working full time.  It took me about three years to come up with a draft that I believed was worthy of publication.

Sadly, not everyone agreed with me.  I submitted my manuscript to 17 agents in Canada and the US.  Most never wrote back.  A few sent kind rejection letters.  Two agents asked for the full manuscript; one ultimately rejected it and the other broke off all communication with me.  In truth, the process was totally demoralizing and I thought seriously about giving up on it, since what had started as a midlife empowerment project was becoming the exact opposite.

I put the book away for a few months and licked my wounds.  Then, in January 2013, I took it out again and read it with fresh eyes.  I still liked it.  I still believed that it could find an audience.  But I knew that I would have to commit to self-publishing if I wanted to get it out into the world.

The logistics of self-publishing aren’t that complicated, and there are many online resources to help you through it.  The biggest hurdle in the self-publishing process for me was that initial decision to put my work, and myself, on display without the protection of a traditional publisher. All evidence to the contrary, I’m a fairly private person. But self-published writers have to force themselves on the reading public and insist that they pay attention to you.

I have a background in public relations, and I created a social media campaign using a variety of tools.  I timed the launch to coincide with Mother’s Day, since The Hole in the Middle is about an overburdened working mom.  I have a pretty extensive network, and I asked everyone I knew to help me promote the book via Twitter, Facebook, LinkedIn and an electronic newsletter.   The result was that I had 13,000 downloads in the first month.  It was so unexpected, and so gratifying.

In the course of all of that self-promotion, The Hole in the Middle fell into the hands of a fellow writer, who gave it to her agent, Beverley Slopen. Beverley loved the book, and invited me to sign on with her, which I was thrilled to do.

Within a week, she had sold it to HarperCollins. HarperCollins released The Hole in the Middle in November of 2013, and it went on to become a bestseller in Canada.

And then we waited.  Almost a year later, Penguin Random House bought the US rights for The Hole in the Middle (along with a second novel), and released it in January of 2016.

At every stage, my writing career has been an exhilarating, frustrating, nail-biting, throwing-myself-on-the-bed-and-weeping, screaming-with-joy thrill ride.  All of it at once.  Except when it’s boring, which usually happens around Chapter 16 for a few pages.  You can skip that part.

About THE HOLE IN THE MIDDLE

The heartfelt and hilarious, international bestselling debut about having it all without losing your mind.

Sophie Whelan is the kind of woman who prides herself on doing it all. In a single day, she can host a vegan-friendly and lactose-free dinner for ten, thwart a PTA president intent on forcing her to volunteer, and outwit her hostile ‘assistant’ in order to get her work done on time.

With her fortieth birthday looming, and her carefully coordinated existence beginning to come apart at the seams, Sophie begins feeling like she needs more from her life—and especially from her husband, Jesse.

The last thing Sophie needs is a new complication in her life. But when an opportunity from her past suddenly reappears, Sophie is forced to confront the choices she’s made and decide if her chaotic life is really a dream come true—or the biggest mistake she’s ever made…

You can follow Kate in a variety of ways:

Read my review of The Hole in The Middle.

53 thoughts on “How I Got Published: Kate Hilton”