Let loose without my leash as a reward for all my patience while I waited for my Dog Mom to finish her latest novel with its new title and blurb.

She’s warned me that although the cover is done, her manuscript is not quite ready. Not more waiting around!

A coming-of-age story with a domestic noir twist

Nadine, tired of running her call-girl agency, has upgraded to gold digger as she finds the perfect rich widower to marry. Discovering that her wealthy widower is an abuser she seduces his stepson, Charlie, to plot her husband’s murder. But things don’t go as planned and soon she is turning to her experience hiring young call-girls to find the perfect girl to save her from going to prison…

Homeless Maya is drifting on the streets, grieving the recent loss of her mother.
When she is offered the opportunity to prepare a lake-side house to be used as a half-way home for delinquent girls, she doesn’t think twice.

She soon falls for Charlie, the attractive boy next door, who has a seriously dark side. She is drawn into his murderous schemes, doing anything he asks her to, risking her own safety for the promise of a future with him.

When she finds herself party to murder, and she realizes he is more concerned with his older female accomplice than with her, she must learn to trust her instincts and use all of her courage to get out of their trap alive.

An older woman, a younger man and their rocky relationship become involved in investigating the murder for which young Maya is accused of committing.

Just Before Sunrise is a story about loss and survival. About loneliness, betrayals and deadly desires.

I recently came across a post on Derek Murphy’s website titled Best Self-Publishing Companies for Indie Authors (that aren’t scams).

You can go to his website to read the entire post (which I found interesting and informative). Since this is a post about Toni Pike’s novel Desolation Bluff I want to draw your attention to a section of Derek Murphy’s post that I find fits perfectly with Toni Pike’s novel.

When you put your book cover, your hook, tagline or teaser in front of the right readership, they understand it’s the kind of book they enjoy reading. The benefits are obvious. They click on the cover and read the blurb. Sounds good. They check out the reviews. If they trust the positive ones, they’ll consider buying it and check the price.

Blind romance author Oliver Cameron uses the pen name of Fidel Amore and thinks he has the perfect life at his country estate near Desolation Bluff. After a honeymoon in Paris, his wife Vanessa continues her work as his assistant. His friend Ray is the business manager who lives in the gatehouse and also acts as the public face of Fidel Amore, doing all those book-signing trips that Oliver never wanted to attend. Helen Dunkley is the housekeeper devoted to him since childhood – but she detests the two newcomers.

Complications set in when Ray, working on his old car, accidentally backs into Oliver. His injuries appear minor but the next day he suddenly regains his sight. Oliver wants Ray and Vanessa to be the first to hear his good news, but when he finds them he uncovers a shocking betrayal.
A game of cat and mouse begins – and with the arrival of a mysterious stranger, it turns deadly.

A short suspense novel that will keep you guessing right to the very end.

More than 30 reviews on Goodreads . Most of them 5 Stars. Here are some of them:

Fast moving and suspenseful from start to finish (Peter Springer)

From the first paragraph, I could sense something ominous in the atmosphere, which stayed all through the background (Sherry H.)

This book was a thoroughly enjoyable read with interesting characters and great plot twist to keep me hooked all the way through to a most satisfying ending!  (D.G. Kaye)

$2.99 Canadian which is pretty inexpensive for three and a half hours of enjoyable entertainment.

As for the content, I was not disappointed. The cover, blurb and reviews delivered. It was a fun ride where justice is rendered by a shrewd blind man who accidently regains his sight and discovers that his wife is engaged in a love affair with his assistant. A story of betrayal between good and bad. Definitely a page turner.

There’s a saying in writing: make every word count or at the very least have every paragraph/scene be relevant. This can be argued, especially for the novel where there is room for sub-plots and leisure strolls through gardens and having tea with a favorite aunt. Not so for the short story. Short stories are (generally) tight, concentrated and condensed.

John Greco’s latest collection of short stories, Devious Tales has all the technical markings of this form and Greco skillfully merges his skill as writer and photographer in these twelve snapshots of life.

His stories are also highly influenced by his passion for noir film and fiction. His short story Late Night Diner reminded me of the rural diner in James Cain’s The Postman Always Rings Twice and I immediately associated his story The Organic Garden to one Stephen King could have written because of its macabre and conniving ending.

John Greco’s stories delve into the dark side of human nature. What makes his stories particularly striking is that his characters (devious, at times creepy and horrendous) are also quite ordinary people who remind us that we too have a lot in common with them.  So frightening!

The characters in these short stories, although not always directly involved in crime take advantage of one, others seek revenge or lust, money and, at times murder all with unexpected and disturbing twists.

Many of the stories revolve around the relationship between man and woman as in An Almost Perfect Woman which illustrates Greco’s crisp, engaging style of writing:

To be honest I don’t find many women good companions. I am a quiet kind of guy, and women, well they like to talk. Not just talk but express their feelings. They need to tell you how they feel. Expose every emotion, bare their soul! And all I can think about when this kind of tirade starts, there is no other word to describe it, is when is this night going to end!

In his blog Greco recently posted his suggestions for summer reading. I’d add Devious Tales to the list.

What I like about the Femme Fatale character is her independence, her  intelligence, her strength, her high sense of self-esteem and her belief that she can have whatever she sets her heart on.

The Femme Fatal is an extremely gorgeous woman who knows how to use her sexuality as a weapon to get what she wants from the men in her life, sometimes leading them into very dangerous and murderous situations. 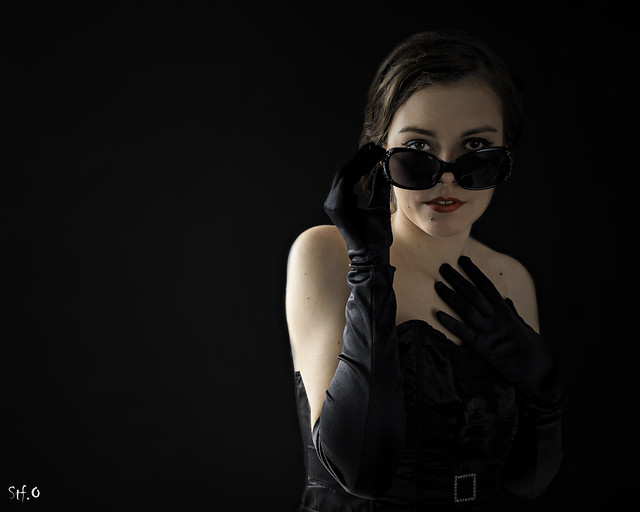 The male protagonist (often a detective on her trail) who inevitably falls  for her, is immediately in trouble. At best, he will suffer from a heartbreak, but more usually,  she will convince him to commit crimes in exchange for the promise of having her.

Lauren Bacall: To Have and Have Not

If one were to package the Femme Fatale the warning on it would read:

Beware: May cause death.

I hope you’ll drop by my blog so that together we can discover these lethal women staring in some of the best of Noir fiction.

In the casinos, she could pass for thirty. The low lighting, her glossy auburn hair, legs swinging, tapping the bottom rim of the tall bettor stools. At the track, though, she looked her age. Even swatted in oversized sunglasses, a wide brimmed hat, bright gloves, she couldn’t outflank the merciless sunshine, the glare off the grandstand. Not that it mattered. She was legend.

The unnamed first person narrator of Queenpin is a book-keeper, some twenty years younger than Denton and whom Denton takes on as her protégé. In the seedy world of gangsters and racketeers  Denton teaches her young apprentice how to prosper :

I gave him my best walk, half class, half pay broad. If you can twist those two tightly, fellas don’t know what hit ‘em. They can’t peg you. It gets them — the smart — ones — going. Spinning hard trying to fix you. You’re like the best parts of their grammar school sweetheart and their first whore all in one sizzling package.

Although Queenpin was published in 2007, the author, Megan Abbott, sets her novel in the 40’s but with a feminist twist.

Traditionally, a femme fatale is completely male-defined: the fatale becomes what they desire because it grants her power over them. Gloria does no such thing. She embodies power, respect, and the promise of violence. She does not mince her words or flaunt her body, and she ALWAYS does her own wet-work… “If you can control yourself, you can control everyone else”.  SOURCE

Megan Abbott has won awards the length of my arm starting with the Edgar Award for best paperback original novel for Queenpin from the Mystery Writers of America. She’s picked up such prizes as The Barry Award, Booksense Notable Pick and was nominated for the Hammett Prize, The Shirley Jackson Prize, The Los Angeles Times Book Prize and The Folio Prize. Her novel The Fever (2014) was listed by Amazon as one of the best books of the year while The New York Times, People and Entertainment Weekly named it one of the best books of the summer. The list of accolades for Meagan Abbott goes on and on.

Like most Femmes Fatales, Laura Hunt is beautiful, elegant, utterly ambitious and mysterious. Her charm makes it difficult for men to resist her, including the detective suspecting her of murder.

Laura is a brilliant mystery both in its plot and structure. Each of the men in love with Laura is a narrator in the novel. There’s Laura’s fiancé, who is unfaithful to her even on the eve of their wedding, her jealous friend Waldo who drives her lovers away and the hard-boiled detective who can’t resist her charms.

In this passage, where Laura thinks of Shelby, the man she is supposed to marry, writer Vera Caspary shows not only literary talent but sharp insight into Laura’s psyche.