In the casinos, she could pass for thirty. The low lighting, her glossy auburn hair, legs swinging, tapping the bottom rim of the tall bettor stools. At the track, though, she looked her age. Even swatted in oversized sunglasses, a wide brimmed hat, bright gloves, she couldn’t outflank the merciless sunshine, the glare off the grandstand. Not that it mattered. She was legend.

The unnamed first person narrator of Queenpin is a book-keeper, some twenty years younger than Denton and whom Denton takes on as her protégé. In the seedy world of gangsters and racketeers  Denton teaches her young apprentice how to prosper :

I gave him my best walk, half class, half pay broad. If you can twist those two tightly, fellas don’t know what hit ‘em. They can’t peg you. It gets them — the smart — ones — going. Spinning hard trying to fix you. You’re like the best parts of their grammar school sweetheart and their first whore all in one sizzling package.

Although Queenpin was published in 2007, the author, Megan Abbott, sets her novel in the 40’s but with a feminist twist.

Traditionally, a femme fatale is completely male-defined: the fatale becomes what they desire because it grants her power over them. Gloria does no such thing. She embodies power, respect, and the promise of violence. She does not mince her words or flaunt her body, and she ALWAYS does her own wet-work… “If you can control yourself, you can control everyone else”.  SOURCE

Megan Abbott has won awards the length of my arm starting with the Edgar Award for best paperback original novel for Queenpin from the Mystery Writers of America. She’s picked up such prizes as The Barry Award, Booksense Notable Pick and was nominated for the Hammett Prize, The Shirley Jackson Prize, The Los Angeles Times Book Prize and The Folio Prize. Her novel The Fever (2014) was listed by Amazon as one of the best books of the year while The New York Times, People and Entertainment Weekly named it one of the best books of the summer. The list of accolades for Meagan Abbott goes on and on.

Bedelia is a sexy, sensitive, emotional fragile female who is good at playing the role of the  submissive, doting, perfect housewife in need of protection by a strong man.

Husband beware. There is another side to this attractive damsel in distress.

As her mask slowly slips away, Bedelia is revealed not only as a pathological liar but as a woman who  has learned to manipulate men’s expectations of women with deadly efficiency. Bedelia is a complex killer protagonist; instead of driving men to crime and destruction, Bedelia is a hard-boiled murderer herself… (Afterword in Bedelia,  p. 204).

Although Bedelia’s bank account increased with each of her husband’s supposedly natural deaths, Caspary is more interested in commenting on the few ways that women at that time (the novel was set in 1913 although Caspary wrote it in 1943) had of getting ahead.

END_OF_DOCUMENT_TOKEN_TO_BE_REPLACED 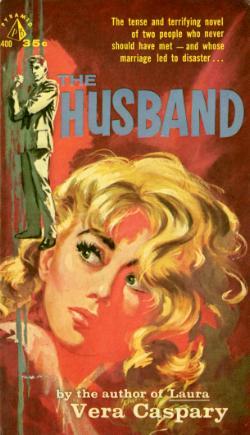 Unlike many femme fatale, Jean McVeigh is neither beautiful, nor curvy. She was too thin, sallow flesh, too pale in tone for her untinted brown hair covered her jutting bones sparsely. No artifice enhanced her womanhood but this, in a certain way, gave her class.

In  a hotel bar in London, she meets Stuart Howell, a dashing, young man with a series of failed investments and in love with Valerie a girl he desperately wants. (We know where this is going, don’t we?)

Her (McVeigh’s)  preoccupation with him was out of all proportion to the circumstances, or to sanity. She told this to herself over and over but failed to weaken her intense longing for another meeting. Jean was at a bad point of her life, the end of one phase and the beginning of nothing.

END_OF_DOCUMENT_TOKEN_TO_BE_REPLACED

Like most Femmes Fatales, Laura Hunt is beautiful, elegant, utterly ambitious and mysterious. Her charm makes it difficult for men to resist her, including the detective suspecting her of murder.

Laura is a brilliant mystery both in its plot and structure. Each of the men in love with Laura is a narrator in the novel. There’s Laura’s fiancé, who is unfaithful to her even on the eve of their wedding, her jealous friend Waldo who drives her lovers away and the hard-boiled detective who can’t resist her charms.

In this passage, where Laura thinks of Shelby, the man she is supposed to marry, writer Vera Caspary shows not only literary talent but sharp insight into Laura’s psyche.